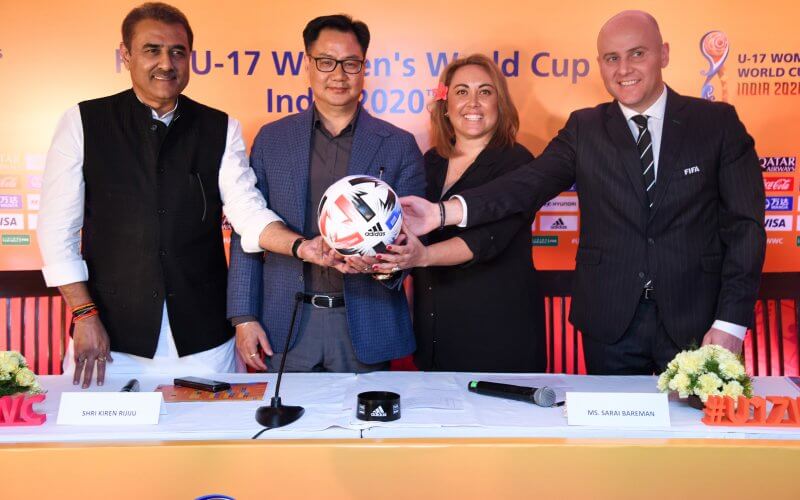 The stage is set for the future stars of women’s football as the match schedule and host cities for the FIFA U-17 Women’s World Cup India 2020™ were unveiled by FIFA and the Local Organising Committee (LOC) today, alongside the Official Slogan for the tournament.

With only 258 days to go until the action gets underway, Ahmedabad, Bhubaneswar, Guwahati, Kolkata and Navi Mumbai have been confirmed as the five host cities for the tournament. Sixteen teams featuring the rising stars of women’s football will compete across 32 matches to lift the coveted trophy in Navi Mumbai on 21 November.

Following the launch of the Official Emblem in November 2019, the unveiling of the five host cities and the match schedule marks a major milestone for the tournament as fans in the host cities and across India prepare to welcome the future stars and heroes of women’s football.

“It gives me immense pleasure to congratulate the five cities hosting the FIFA U-17 Women’s World Cup India 2020. As India prepares to host yet another FIFA event, I look forward to the support from the whole country in making this tournament a rousing success. Our Indian U-17 women’s team will be playing in a FIFA tournament for the first time. It is a proud moment for the nation and we will provide all possible support to ensure its success.”

In another significant announcement, the Official Slogan – Kick Off The Dream™ – was also unveiled at a press conference in Delhi today.

Building on the passion and excitement generated by last year’s FIFA Women’s World Cup™ in France, as well as the legacy left by the FIFA U-17 World Cup™ that was hosted by India in 2017, Kick Off The Dream represents a powerful message that aims to encourage and inspire both men and women in India and beyond to pursue their dreams and help to kick start a new era of growth for women’s football in the country and around the world.

“Today’s announcement of the match schedule, host cities and Official Slogan for the FIFA U-17 Women’s World Cup India 2020 represents a major moment for the tournament and football fans across India and around the world.

“As the official tournament slogan, Kick Off The Dream perfectly captures the aspirational and empowering message for the tournament as we look to grow women’s football and use the tournament as a platform to inspire girls of all ages across India and around the world.”

“The announcement of the match schedule is an important moment on the road to the tournament as we not only know which cities will host what number of matches, but fans too can start saving the dates for this November. I am confident that the five host cities will do a wonderful job hosting the best young footballers in this important tournament.”

“With five host cities and 16 teams playing across 32 matches, the stage is set for the rising stars at the FIFA U-17 Women’s World Cup India 2020. Tournament preparations are well underway and approaching their final stages, and we are excited to work closely with the LOC to bring the tournament to life. We are confident that India will deliver a truly spectacular FIFA U-17 Women’s World Cup later this year, while providing the players with a platform to perform at their highest level.”

“This is the first time that an Indian women’s team will take part in a FIFA World Cup. It is a significant moment for women’s sport in the country, and in recognition of the excitement, and the hope that this Tournament brings with itself, ‘Kick Off The Dream’ was the most fitting choice as the Slogan for us and we hope to kickstart the growth of women’s football in the nation and ask everyone to join us to realise this dream”.

Further information on ticketing will be announced over the coming months. Fans wishing to secure their seat for this unique tournament are requested to regularly check FIFA.com/tickets.

Women Football Playing football at this level is a dream come tru...